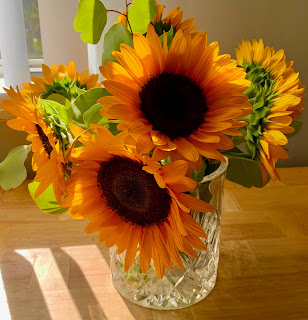 Yes. Summer is ending. The days are warm now and the evenings are cool. There was some joy this summer; not many beach days that counted; no picnics; and no gatherings of friends. Like most of you, we've been isolating from most people—strangers and friends alike. A few brave and perhaps foolish souls flew out from the east coast to visit for brief periods. Henry and I don't encourage this. His lung health is not fully back to normal and the virus would be brutal on him. Henry has been in at home physical rehabilitation since April and he is improving rapidly, though not as fast as he would like of course. He's eager to drive again but his license expired while he was at California Rehab and he was not able to file for renewal online. Then on September 1 he had surgery to remove the hardware that was in his hip and thigh. The recovery was very painful for three or four days but he quickly rebounded and has healed well and this Friday had the remaining staples removed from his leg enabling him to put his prosthetic leg back on. This morning he and his friend TC went out for a ride and to get hair cuts. He's back to working with his personal trainer (Phil) and Rehab Without Walls has begun to work on his physical and occupation therapy sessions four days a week. Are we where we hoped to be last December? No. His injuries were extensive back in November of 2019 and his body is still healing. I unrealistically thought we could travel to Europe this year! Even if we had we would not be able to because of the pandemic.This brings on a double melancholy for us. We miss our friends in Europe; we miss our friends here in America; and we miss our lives as we once lived.
Our many friends and family: you have our gratitude. Your rescue I'm sure helped save Henry's life and give me the strength to get through the hard times. We are approaching one year since the accident that upended our lives in November and it is now 6 going on 7 months of isolation due to the virus that has affected everyone. I hope next year at this time Henry and I will be spending time in Europe visiting Ibiza and Paris and Amsterdam and Berlin enjoying friends, drink, and food!! Stay well! Wear your masks and wash your hands. And most of all—
Be fierce and thrive!
—Ph/HOPBELL
Posted by Ph/HOPBELL at 12:59 2 comments:

I have no idea if Beethoven was black but he was called The Spaniard because of his dark complexion and the composer Samuel Coleridge-Taylor, himself of African descent, made the claim 80 years after Beethoven's death which is recounted in this  article I found the other day in The Guardian. As the article points out this phrase became a mantra: ""Stokely Carmichael raged against the deeply ingrained assumption that white European culture was inherently superior to black culture, the baton was passed. “Beethoven was as black as you and I,” he told a mainly black audience in Seattle, “but they don’t tell us that.” A few years earlier, Malcolm X had given voice to that same idea when he told an interviewer that Beethoven’s father had been “one of the blackamoors that hired themselves out in Europe as professional soldiers”." Read the article here...

This article reminded me of in incident with our beloved nephew TJ (RIP). TJ came to live with us twice and I greatly enjoyed watching him grow up but he died too soon. When he was in high school at John Marshall here in Los Angeles, his reading teacher gave the class an assignment to read a black author and write a one page report on the book. When TJ came home that day he asked me if I could recommend a book by a black writer he could read. I asked him if the writer had to be American and he said only that the author had to be black. Knowing TJ had a taste for adventure I pulled a copy of The Three Musketeers by Alexandre Dumas. We had watched an old movie of the book and he liked it so I figured he would like to read the book. He read the book over the course of the following week and wrote a little one page report/summary. He told me several times how much he liked the book and I was happy he found reading a pleasure. A few days later he came back with the report and it had a big red F on the front with a note that Dumas was not black but French! I was furious to say the least and wondered how this teacher did not know Alexandre Dumas was black...and French! I went to a parent teacher meeting and asked the teacher if she had assigned the class to read an American black author and she said no he could read any black writer but that Dumas was French. After much discussion I was able to get her to understand that while Dumas Grandfather was white his grandmother, Marie- Cessette Dumas, was, in fact, of African descent. Alexandre Dumas the great French writer was black. This was a fact well known in Dumas' lifetime and something he never hid. Dumas wrote a novel call Georges about a man who was of mixed race. TJ's grade was changed and he got an A which was probably the only A he ever received. You can read about Alexandre Dumas here

Many white people have a hard time conceiving that cultures and races other than white European culture have any value. Of course this is the genesis of the problems we are experiencing in American now. Black lives are valued less than white lives for no reason other than the color of the skin covering their bodies beneath which we are all very much alike. This same entitlement reminds me of the outrage that was expressed when Larry Kramer (RIP) announced that Abraham Lincoln was gay even though that same thought had been expressed obliquely by Carl Sandburg in his multi-volume award-winning biography (read here for interesting commentary). If one is an example of white European entitlement the other is an example of heterosexual entitlement.

On September 1 Henry had surgery on his left hip and thigh at Cedars-Sinai Medical Center in West Hollywood. The surgeon, Dr. Moon, removed the hardware from his hip and cleaned out the MRSA infection. Blood cultures now show no sign of infection. He spent a few uncomfortable days in serious pain after but was able to sit up and take himself to the toilet. On Sunday, September 6, he was transferred to California Rehabilitation Institute in Century City where he is going through rehab under Dr. Cushing and his team on the fourth floor. He's doing great and spending the days in therapy and watching tennis on the television. We hope he will be able to come home next week. He currently can only have one visitor a day and visiting hours are between 5 and 8 in the evening. Please call him if you plan on visiting as he has a schedule of visitors already and can only have one visit per day. Of course this is all due to the Covid pandemic and we want to make sure he and the staff remain virus free. I hope you are keeping safe and isolating when possible as well. Los Angeles seems to be coming out of a critical time but that doesn't mean the virus is gone. I suspect you and I will be living this way for a very long time. 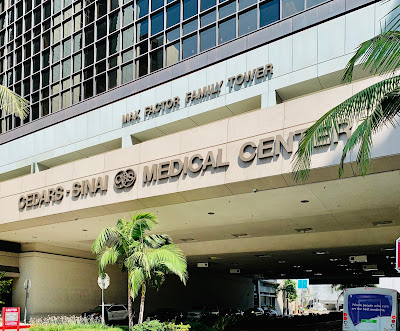 Here we are again: on Tuesday (09.01) Henry had surgery on his left hip and femur to remove the hardware and infected flesh. The surgeon also put a "nail" with antibiotic coated on it to kill off any remaining MRSA. This was a planned procedure but stressful and very painful for Henry. Today (09.03) he's still at Cedars and we think he will be there to Saturday. He really wants to come home but there are therapy and tests that have to be done before he can be safely released. Needless to say this is very stressful for the two of us and he appreciates the prayers and chants everybody gives him. All the staff on the 7th floor remember him and come in to say hello and wish him well—he's well liked and taken care of. The nurse in the recovery room after surgery remembered him and he remembered Halim as well. Halim was the nurse who helped me put Henry back in bed after he tried to get out of it after the amputation and when he was delirious. If you know Henry you know he bonds well with people.

I am taking care to eat this time around and get sleep and I thank everyone who annoy me by reminding me to take care of myself. It's taken me these ten months to get over the shock but I understand I need to be strong and healthy for him to fully recover.

Be fierce and thrive...! 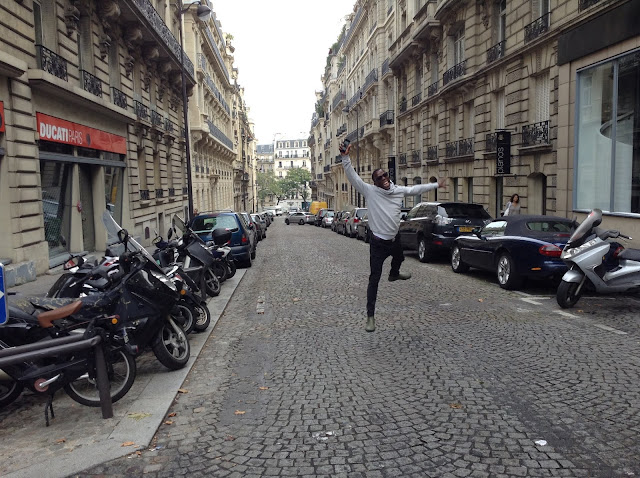